"Just trust yourself and do your best. That’s all that you can really do as a parent. You will make it through!" 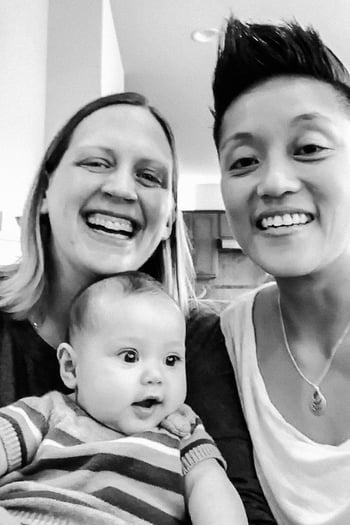 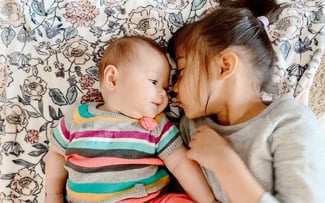 Jennine and Dez had two older children ages 2 and 5 when Jennine gave birth to their third child, Madison. Both moms were already committed to breastfeeding, based on their personal experience and knowledge of the many nutritional, health, and bonding benefits.

Jennine knew it was something she really wanted to do and that she would do everything she possibly could to make sure that she could nurse Madison. Jennine shared that she was super excited about nursing, but was not prepared for what was to come.

Because Dez had carried and breastfed their two older children, this was Jennine’s first time giving birth and breastfeeding.

Hours after Madison’s birth, we realized something wasn’t right. Our newborn was having trouble latching, causing intense pain and discomfort for Jennine, and preventing Madison from being able to latch and get a solid feed.

Madison was hungry. She was getting frustrated because she really wanted to latch but was limited in what she could do. It was hard and so painful. Jennine was literally cracked and bleeding.

Determined to breastfeed no matter what it took, we got to the point where we were hand expressing and spoon feeding Madison, saving every precious drop of colostrum while waiting for the milk to come in.

As the days went on, things got worse. We were having that conversation around whether we would have to supplement with formula. We were asking ourselves, ‘What do we do?’ It was really hard watching Madison lose weight when she was supposed to be gaining weight.

We felt anxious, we knew we were going to get through it but didn’t know how exactly. So we asked for help from the hospital’s lactation consultant, Annie Kunkel, RN, IBCLC, at Valley Medical Center. Madison was suspected to have an oral restriction. After receiving extremely valuable advice and resources from her, we immediately set to work researching and educating ourselves on oral restrictions in order to make the best decision.

Because we’re so committed to breastfeeding it became a question of how, rather than if, the release procedure needed to be done. We began to ask ourselves and our healthcare providers questions. Should the release procedure be done with scissors, or by laser? How do we know which doctor to trust? We did a bunch of research and we knew we wanted it to be as painless, fast, and effective as possible, which is why we went with the laser.

When Madison was eight days old, we went to our appointment at health:latch clinic where Madison was assessed and diagnosed with a severe tongue tie as well as a lip tie. It was clear that her oral restrictions were preventing her from getting a proper latch and seal to feed. After careful discussion and deliberation by the medical team, Madison received a CO2 laser frenectomy, releasing both of her oral restrictions.

It blew us away how immediate the change was and how painless it seemed. Madison didn’t even bleed. Just a few minutes after the procedure Madison was able to latch and breastfeed.

We noticed an immediate difference in how she was nursing. Finally, Madison was able to feed and feel satisfied.

The relief and satisfaction for us was dramatic. It was a night and day difference and we are so grateful for having been able to do that. Madison immediately began to gain weight.

After the release procedure we made sure to seek further guidance from a team of healthcare professionals including bodyworker, Cori Dixon, to maximize Madison’s recovery and develop oral motor function. We had a follow-up visit for bodywork. With the support of the lactation consultant, Jennine was able to get a properly sized nipple shield and support with breastfeeding techniques and positions. 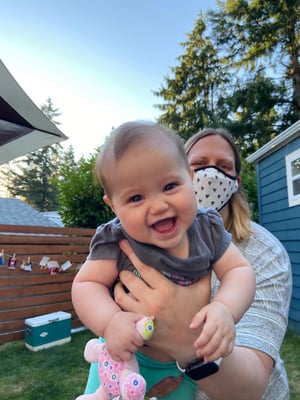 thriving. Due to our experience we began to notice signs that our older son might also have a slight tongue tie and we are having him evaluated.

Madison was a trooper. Today she is such a happy and healthy baby. It was a hard and crazy journey and definitely a very happy ending, without treatment for her tongue tie I don’t think that Madison would be thriving like she is today. We would have gotten to a breaking point where we would have had to go to formula. With this treatment we’ve hopefully avoided other development issues for Madison later in life.

Before going through this, we didn’t know much about tongue tie. It wasn’t something that was covered in our birthing classes. Thank goodness the lactation consultant at our hospital was able to identify the signs and guide us to the right resources and team. I can’t imagine where we would be if we hadn’t done this procedure.

As parents going through this for the first time, there is all of that unknown. Being on a mission to breastfeed made it easier to do what we needed to do. In the end we knew it was the right choice.”

“As a parent, you’re doing your best. Sometimes there are things that you need help with from others to be able to successfully breastfeed your baby. Give yourself grace through the process and know that there are better days ahead.”

Create your FREE circle account for you or a loved one here to start connecting with trusted circle providers.